This post goes back in history.  The year was 2010, but it hearkened back to my college years and my first photography class in late 1979.  In an attempt to teach us the concepts of photography, we built our own pinhole cameras out of cardboard and a soda can for the pinhole.  These cameras produced 4"x5" negatives because we used 8"x10" photo paper and cut it down into four equal sizes, which gave us four "negatives" per sheet.  This type of early photography, from the 1820s, was called Calotype photography.  As an example, here is one of those shots I took back in 1979: 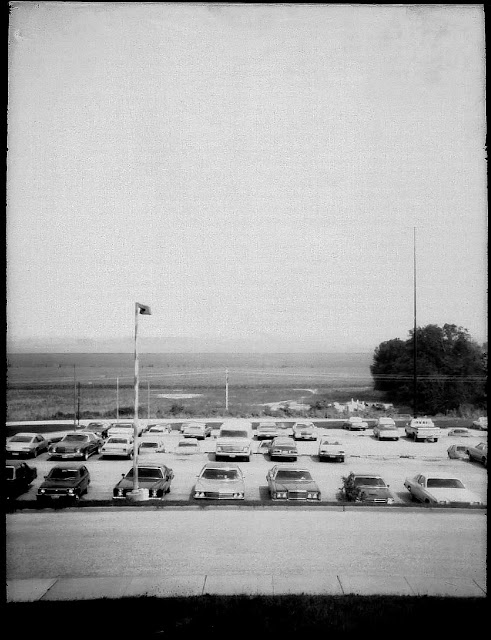 It shows the parking lot of Southeastern Illinois College, which is the college I went to.  I chose that subject because you could only load and take one picture at a time and to load and unload the camera, it had to be done in the darkroom - and I used the college's darkroom.  Plus, the original shot was a "negative" image and had to be contact printed to get a positive print.  Fast forward to 2010.
Remembering those early, (for me), pinhole camera days, I thought I'd revisit them and make my own pinhole camera again.  I had read where people were using all sorts of containers to use for their camera bodies and then adapting photographic paper or different sizes of film for their negatives.  Some of the smallest cameras I saw being made were out of matchboxes.  This inspired me to use an empty box of film for my camera body.  When it was finished, this is what it looked like: 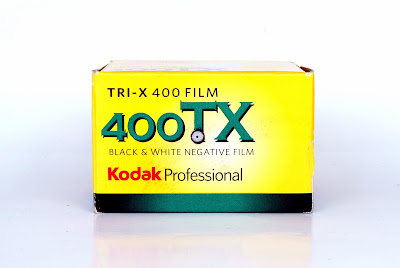 But to use it, I had to cut down a piece of 35mm Kodak Tri-X 400 black and white film to shoot in it and then tape up the box so it wouldn't have any light leaks.  For my "shutter," I simply used a piece of tape over the pinhole "lens."  It didn't look so polished, but it did keep the film from the light: 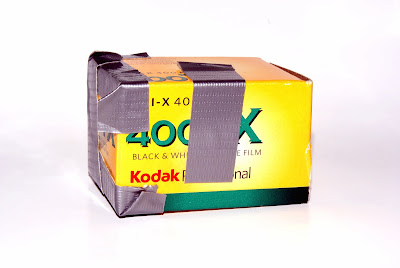 It took me several attempts of shooting before I was able to get a decent image, but one of the earlier images that didn't turn out so good looked like this: 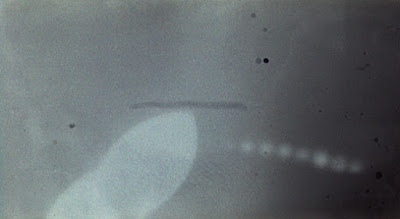 Finally, I was able to get a fairly good image, and it was taken at the Fairfield, Illinois fairground during their Fall Fun Fest days of 2010:

I don't know what that curved group of light blobs were or what caused them, but they were present in all my shots, even when I used a different pinhole piece of aluminum in my final iteration of the camera.  The above shot looked like this taken with another camera, which employed about a 28mm focal length, so I guess my film box pinhole camera had a pinhole about the equivalent of a 28mm lens: 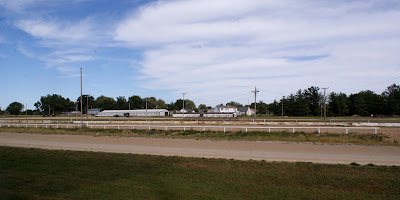 Since I eventually got my pinhole camera to take a picture you could somewhat recognize, I considered it a success.  Now, I'm wanting to build another pinhole camera that uses photographic paper and get back into taking some calotypes.  Stay tuned!
Posted by HaarFager at 9:39 PM