For my birthday in February, my sister got me a dvd with a movie double feature.  I've never really seen anything like it because the two movies were from different studios - Warner Brothers and Paramount.  Of course, you've probably realized since this is my annual Ten Commandments post that one of the movies on this 4-disc set was The Ten Commandments.  Yes, and the compilation disc says it was released in 2013.  It also gives the running time of The Ten Commandments, on the label as "220 minutes."  But the discs say it's 231 minutes.  These translate to 3 hours, 40 minutes and 3 hours and 51 minutes respectively.  I'll have to watch it and see which of the several versions it might be and it's true length.

Every Easter, my family would always have ham for the holiday.  So, this year, I'm going to have ham, mashed potatoes and gravy, macaroni and cheese and some rolls while I watch the movie later tonight.  It promises to be another great viewing experience of my favorite movie. 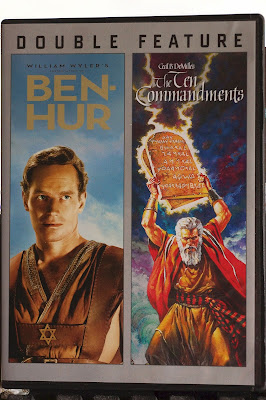 You'll notice that the cover shows the "bulked-up" Moses.
Posted by HaarFager at 2:58 PM No comments: Links to this post