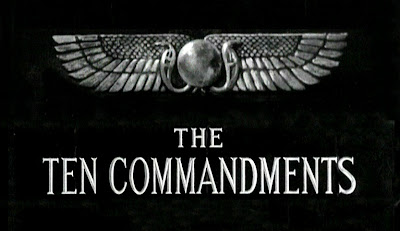 It's hard to believe that this is already my fifth annual Ten Commandments post. Regular readers will know that this is my favorite movie of all time and I've seen it probably 40 times at least. While it might seem like there's nothing new under the sun to say about this movie that hasn't already been said, (probably by me), I still can't let this time of year arrive without passing on the good feeling I get anticipating this movie once again. When Spring arrives, I start getting that "itchy" feeling that Easter is near and it's time to make preparations once again for you know what. When the movie starts, from the opening where the baby Moses is found on the river; to the clashes between Moses and Rameses; the time Moses spent in the desert as an outcast: until the end when the Children of Israel are looking over into the Promised Land, there are many peaks and valleys in this movie to keep my attention. If you haven't seen it in awhile, you might think about viewing it with your family - make an event out of it.
The title screen above is not from the 1956 version of this classic, but from the first, silent version Cecil B. DeMille made back in 1923. I still haven't found time to watch this bonus feature that was included in my 50th Anniversary DVD set, but I will one day. For now, though, I'm getting ready for the big event - so let it be watched! I'll leave you with a scene from the silent version. It's where Moses comes down from the mount with the tablets containing the Ten Commandments in hand. He seems to be saying, at least in my opinion, "Thou shalt not miss watching The Ten Commandments this year! It may be your last chance!" 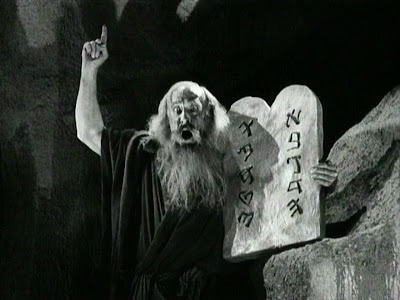 Posted by HaarFager at 10:22 PM No comments: Links to this post