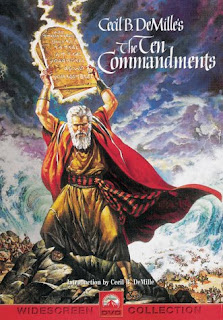 For my annual post this year, I thought I'd speak about the sources used for where the story of The Ten Commandments actually derives.  It is an exciting tale, full of drama and conflict, and spans the entire life of Moses.  I'd be willing to bet that the first time a lot of us heard about the story of Moses was most likely in Sunday School.  In the credits of The Ten Commandments, it does mention the "Holy Scriptures."  But, to fill in parts of Moses' life that aren't mentioned in The Bible, the script writers studied several other modern and ancient texts for this information.
The final shooting script was written by Aeneas MacKenzie, Jesse L. Lasky, Jr., Jack Gariss and Fredric M. Frank.  To put the story together, information was also used from the books Prince Of Egypt, by Dorothy Clarke Wilson; Pillar Of Fire, by Joseph Holt Ingraham and On Eagle's Wings, by Arthur Eustace Southon.  The book Prince Of Egypt, published in 1949 not too long before Cecil B. DeMille's movie,  was also used for an animated movie about Moses, but only the title of the book was employed, and it was released to theaters back in 1998 under the title The Prince Of Egypt.  Pillar Of Fire was published in 1859, while On Eagle's Wings was first printed in 1939.
The film's researcher, Henry Noerdlinger, also consulted such ancient texts as the Midrash Rabbah, Life Of Moses by Philo and various writings of Josephus and Eusebius.  Philo lived during the time Jesus walked the earth, from approximately 25 B.C. to 50 A.D., so he may have had texts to work with that are no longer extant.  Cecil B. DeMille mentions this during the prologue to The Ten Commandments.  Josephus lived from 37 A.D. to circa 100 A.D., while Eusebius was around during a later period of approximately 260 - 340 A.D.
So the story of The Ten Commandments comes from many and varied sources, but it was all brought together for the big screen under the directorship of Cecil B. DeMille.  The Ten Commandments was the highest grossing film of 1956, and allowing for inflation, as of 2017, is the 7th highest grossing film of all time.  The film has been broadcast on television since 1973 by the ABC network, and that is where in earlier years I got to see it every year at Easter.  But my first viewing of it was at the theater on a big, silver screen located in Safford, Arizona back in 1966, when it was given a 10-year re-release.  Having seen this film probably at least 50 times, I highly recommend it!  Be sure to catch it on it's annual showing on television!
Posted by HaarFager at 4:37 PM No comments: Links to this post