No Smoking Permitted In Federal Buildings

Executive Order 13058, "Protecting Federal Employees and the Public from Exposure to Tobacco Smoke in the Federal Workplace," was enacted on August 9th, 1997. It bans smoking in all Executive Branch facilities, (i.e. the White House), and all interior space owned, rented or leased space by the Executive Branch of the federal government. That would be the United States Federal Government - the people we elected - that government.
Fact 1: The President of the United States Of America Barack Obama is a cigarette smoker.
Well, that's really the only fact you need to know. Just where does he smoke? Does he go outside like the rest of the American citizens have to, or does he break the law? You have to ask yourself which one you think is right. I'm betting that Obama doesn't always have to keep going outside to light up. But, you ask - he's breaking the law! Exactly. Apparently, he feels he's above the law. Why else would he keep circumventing the United States Constitution like he does? Do you really need to know anymore about this man? You already know what he's doing to this country. Stand up for your God-given Constitutional rights and voice them wherever they can be heard. While you still have the freedom of speech to do so.
We need to get our America back.
Posted by HaarFager at 6:18 PM 1 comment: Links to this post

This is something I've been wanting to do for awhile now, so I'm finally doing it now that blogger is working again.

I will be spotlighting various animated characters that I think are drawn to be fabulous cartoon babes. The first one is from the 2000 movie The Road To El Dorado. Two adventurers during 16th century acquire a map supposedly leading to the fabled golden city of El Dorado. Through a couple mishaps and adventurous turns, they do indeed end up at the doorstep of El Dorado. There they meet one of the native Mayan women who helps them with their charade of pretending to be gods. Her name is Chel and she is voiced by Rosie Perez. With Rosie Perez fleshing out how the character sounds and acts, the animators did their part in the "fleshalization" of Chel. She is truly something to look at and in every since of the word, a "babe!" Enjoy this full-length portrait of her below and if you can find the movie, buy it. It's a great one to watch over and over! I've added it to my personal dvd collection and have watched it at least a half-dozen times or more - it's that engrossing of an adventure/comedy flick! I also just found out that it was inspired by all those "road movies" of the 1940's that Bing Crosby, Bob Hope and Dorothy Lamour starred in. You remember, The Road To Zanzibar, The Road To Morocco, etc.? Posted by HaarFager at 8:22 PM No comments: Links to this post 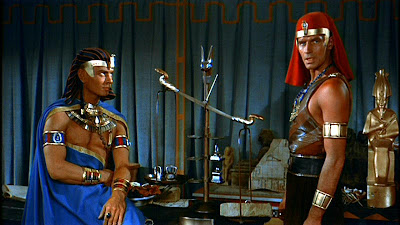 Well, as you can see by the above picture, I finally have gotten my copy of the 50th Anniversary Collection version of The Ten Commandments! I had procrastinated for long enough. This special edition also has the 1923 silent film version of The Ten Commandments, so I'm sure it will contain some more blog fodder. (Even if Charlton Heston isn't in it!) But, his version is my favorite, mind you. The above scene is just after the part where Yul Brynner has tried to insinuate that Heston's character of Moses has been treasonous to the Pharaoh. Heston encounters with his classic line, "The strong make many.... the starving make few.... the dead make none." Case closed! That line is just too cool. And something else that has stayed with me since I first saw it in 1966, that evil-looking mountain Paramount uses for this movie alone to show their logo over the top of. That's one bad mountain! Stay tuned because there will be more posts about Charlton Heston and The Ten Commandments, my favorite move. Have no fear on that score! You have to have this movie in your collection. 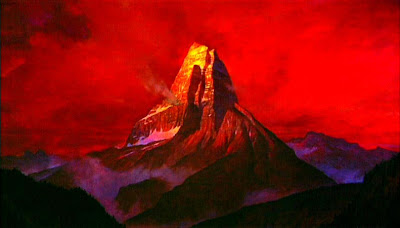 Posted by HaarFager at 9:15 PM No comments: Links to this post