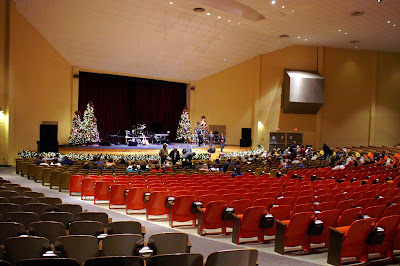 I posted some pictures of the 1910 Fruitgum Company performing at this very rockshow here, but I thought it was high time the other acts that were also there got their due recognition. The show took place in the auditorium pictured above, and was part of the Freed-Hardeman University of Henderson, Tennessee. It was a very nice atmosphere in which to hear a show such as this and I had the absolute best seats in the house for taking pictures. At least, I felt so. No flash photography was allowed, but my camera performs well in low-light situations, so my seat in the sixth row, dead center of the stage was perfect for my needs. A row closer, and I would have been looking up from below the front lip of the stage. As it was, you can see from the pictures below that I was only just slightly above being level with the stage and this allowed me to get shots from the closeups pictured here to complete wide angles that included the entire width of the stage - and I managed it using only 1 lens! Yes, my 18-70 mm zoom lens is perfect for a wide variety of situations. I plan to employ the same lens on May 17th, when I return to the same venue for the Caravan Of Stars XV. I have a seat only one space away from where I sat for this show, and it's in the same row. That's one of the benefits of ordering your tickets early, I suppose, as I got to request the seat I wanted. It promises to be another great show and of course, I'll probably post some shots from it here in my blog. The artists scheduled to appear at that one are Al Wilson; Billy Joe Royal; Billy Swan; Bob Miranda - lead singer of the Happenings; Dennis Tufano - lead singer of the Buckinghams, making another appearance; Joey Levine - lead singer of Ohio Express; Merrilee Rush; Ron Dante - lead singer of The Archies, The Cufflinks and The Detergents; The Cowsills - the original inspiration for The Partridge Family; and Tony Burrows - lead singer for Edison Lighthouse, White Plains, Brotherhood Of Man, First Class and The Pipkins. I can hardly wait! Now, for the details on version XIV of the Caravan of Stars: 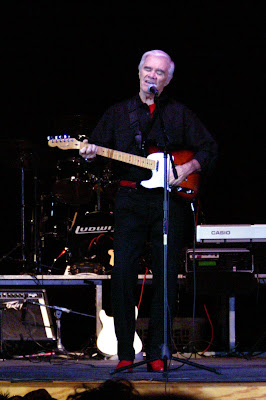 When we got there, the drummer of the group I'm currently in and I, the doors weren't scheduled to open up until 5 p.m. So, we waited in line with the 5 other people there ahead of us. The next two people to show up, were sisters. They fell into line behind us and we four began to talk. We all struck up an immediate friendship, and in fact, went out for a late dinner together after the show. When the doors opened, those of us who had purchased V.I.P. tickets got to meet the stars and get their autographs. Every one of the 9 acts were very gracious about this. I know they must have done this a million times before, but they acted like normal, friendly people. I managed to get all their autographs and photographs and I even purchased the 1910 Fruitgum Company's new cd, which they were kind enough to autograph for me. Once the show began proper, the lights in the house went down and Dickie Lee opened up the proceedings. He played such hits of his as I Saw Linda Yesterday, Patches, Rocky and others. I hadn't been aware of the fact that he played guitar left-handed, but he did and played it well, too! 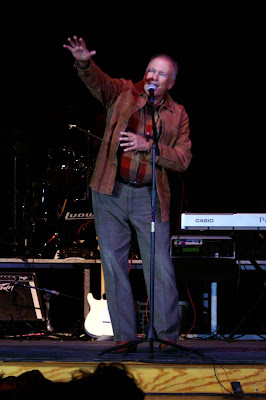 Next up was Jimmy Gilmer, whose group Jimmy Gilmer and the Fireballs had some hits in the early 1960's with songs such as Sugar Shack and Daisy Petal Pickin'. He sounded exactly like he did all those years ago - his voice was as good as ever! I just recently found out an interesting fact that deals with him and his group. In the couple months before Buddy Holly died, late 1958 and January 1959, he had recorded some demos of songs in his New York apartment that he had written, but had not had a chance to record properly in the studio. After his death in February, 1959, those demos eventually got adorned with backing instruments and back-up vocals starting in the early 1960's. And, you guessed it, the group that played on a lot of these sessions was Jimmy Gilmer and the Fireballs! It seems they both recorded out of the same studio in Texas. 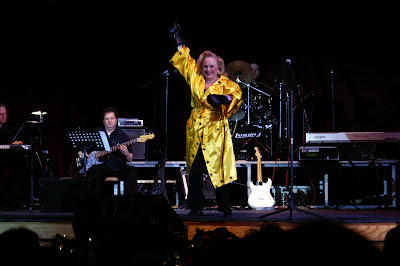 The third act to hit the stage was no stranger to bright lights and fame. Carol Connors had been a member of The Teddy Bears, whose late-1950's hit To Know Him Is To Love Him, had been a smash on both sides of the Atlantic. The Beatles even covered it in their early live shows. Next for her, she wrote the song Hey Little Cobra, which was a smash hit for The Rip Chords. Later, in the 1970's, she co-wrote the theme from Rocky - Gonna Fly Now. She still writes and performs worldwide. She came out on stage dressed like a boxer, to the strains of her theme from Rocky. 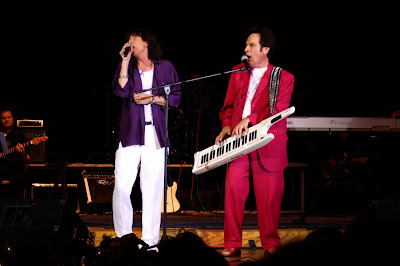 Next up was a group from the early 1970's who had a hit I remember quite well. I even have the 45 rpm of it still. Bo Donaldson and the Heywoods had a number one hit with Billy, Don't Be A Hero - you probably remember it, too. It was about a young boy that went off to war, against his girlfriend's wishes, but dies in the end and becomes a hero. Bo Donaldson, played keyboards for the group, but the lead singer was the guy pictured on the left above, named Mike Adams. 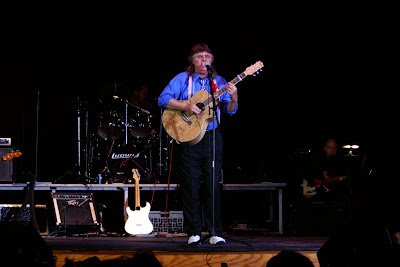 Next up was the singer who had been with The Association, who still tours, by the way. His name was Jim Yester. He performed many of their greatest hits, including my favorite, Never My Love. That song has the distinction of being the most-played song on the radio of all time. After he did hits by The Association, his brother, Jerry Yester came out and they did a couple songs together. Jerry was in the group The Lovin' Spoonful, of which you'll hear more below. 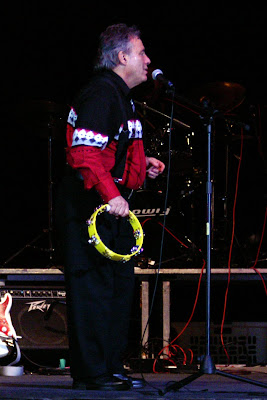 Somebody I never thought I'd see was Eddie Brigati, the lead singer of The Young Rascals, and later, just The Rascals. He came out of retirement to play this show and he was just marvelous! It seemed like he started out slow, and a bit unsure of himself, but after the round of applause came for his first number, he loosened up and let fly with a great many hits of The Young Rascals. He even performed Mustang Sally, which was a song they covered and I know this because, once when I was in a band, we couldn't find any version of this song to learn except for a version on an album by The Young Rascals! 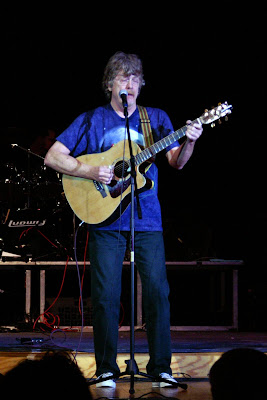 After Eddie left the stage, Jerry Yester returned and sang several hits by The Lovin' Spoonful. And he played a couple new ones that must have been his own songs. Both were well received by the audience members. 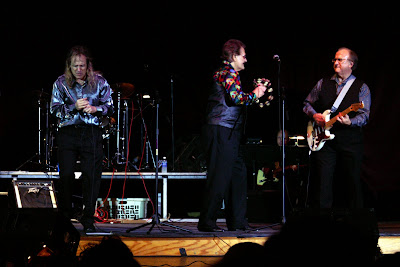 Next up were the group I had originally come to see. When I first heard about this show, I didn't realize there were going to be any other groups besides The 1910 Fruitgum Company. I still own several of their singles and their songs were the soundtrack for my early childhood. They played such songs as Simple Simon Says, May I Take A Giant Step, Indian Giver, Goody Goody Gumdrops, Special Delivery and my favorite 1 2 3 Red Light. Let me tell you, they know how to put on a good show! I found out from their website that they were performing in London a few weeks after this show. It must be nice! 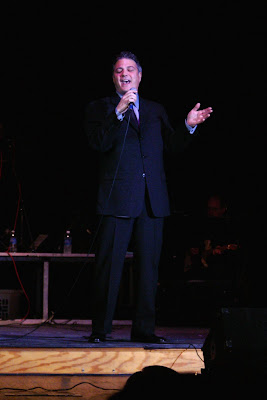 Dennis Tufano, lead singer of The Buckinghams, came on the stage last. There was supposed to be one other act, to make it an even 10, but Barrett Strong failed to show up. I heard event organizers talking about this. They said they sent him the money to appear, but he didn't make it, for some reason. But, Dennis Tufano more than made up for any shortage of talent and entertainment. He sang the greatest hits of the Buckinghams, who still tour without him, by the way, and then as an encore, he came back out and did a dead-on impersonation of Bobby Darin's Mack The Knife. I have since found out that he does a Vegas-type show of nothing but Bobby Darin songs. It's probably something to see! Dennis has a great voice and stage presence and had everybody on their feet when he was finished. I look forward to seeing him again at the next Caravan of Stars.

After it was all over, Jim and I met with Janie and Janet, the two sisters we'd met in line, and had a late dinner at an International House of Pancakes restaurant. We said goodbye and came home, but it was a great day, all in all! It was the first thing like it I had ever attended and loving music like I do, how can I not go to another one?

Posted by HaarFager at 9:51 AM

I saw your blog post about the Caravan of Stars -- sounds like it was a lot of fun. I just wanted to let you know that I have seen Dennis Tufano's Bobby Darin show and it is every bit as wonderful as you would imagine. I wrote up a review of it here: http://www.darinfans.com/dtufano/dt_reviews.html

And you can now see some of his BD show here on Dennis' website:
http://www.dtsings.com/As_Long_As_Im_Singing/CONCERT_HIGHLIGHTS.html

Enjoy! And thanks for spreading the word!

I have been looking up anything I can find on Dennis Tufano. Is there going to be another Caravan of Stars this year (Nov 2008)?

Where and when does he perform his Bobby Darin Show?

Well, there is going to be a Caravan of Stars 16, and it's going to be held on October 18th, 2008, at the Carl Perkins Civic Center in Jackson, Tennessee. For more information on that show, Google KOOL 103FM.

Dennis Tufano won't be at this one, but for everything you'd possibly want to know about Dennis Tufano, please go over to the Yahoo.com group called DennisTufanoRocks. I'm a member of that group! There you will find all the news about his Bobby Darin show and other appearances. Go to this link:
http://launch.groups.yahoo.com/group/DennisTufanoRocks/?v=1&t=directory&ch=web&pub=groups&sec=dir&slk=10