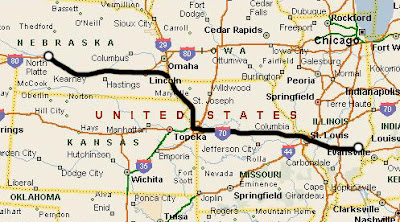 When we woke up on the morning of Day 6, the sun was shining brightly and it looked clear and warm. We found the dining area and had a leisurely breakfast before checking out and getting back on I-80. 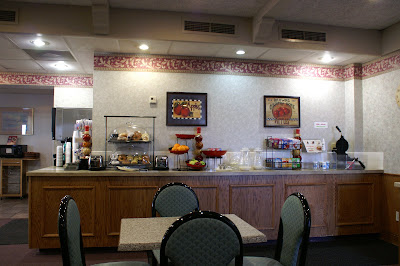 The breakfast selection at the Ramada. 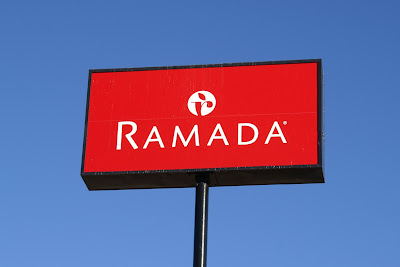 This sign could be seen all the way from the interstate. 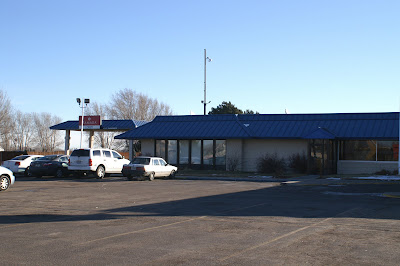 The front of the Ramada as we were leaving.

Since the weather didn't appear that it was going to be a factor today, we took time to get more pictures of the sights to be seen along the way. Interstate 80, at one time, used to be part of the Pony Express route. We noted what the sign said, but didn't stop there. 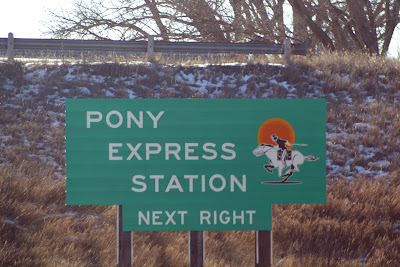 The Pony Express station.
Now, there had been one thing we had passed on the way through that we couldn't explain. We had seen this structure that spanned the entire length of both sides of the freeway and on each end, what appeared to be gargoyles or something. We never did figure out what it was. But, we knew that on the way back, when we got to it, we would stop and see what it was all about. It turns out that it wasn't gargoyle statues that adorned it, but something else to commemorate a long-past event in the history of that particular area. 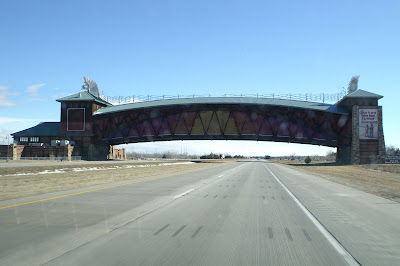 The Great Platte River Road Archway Monument.
It turned out to be a place to honor the pioneers that had passed through the area. That very spot was where several trails such as the Pony Express, the Overland Stage, the first transcontinental railroad and the first transcontinental telegraph had converged. To commemorate the event several statues and plaques had been erected, as well as the Archway building itself. Inside it, you could take a tour over the interstate. 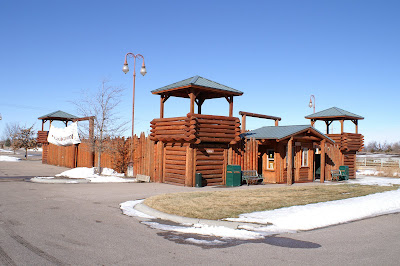 A replica fort of the era.
There was a huge buffalo statue out front, and of course, I had to get Phillip to take my picture standing beside it! 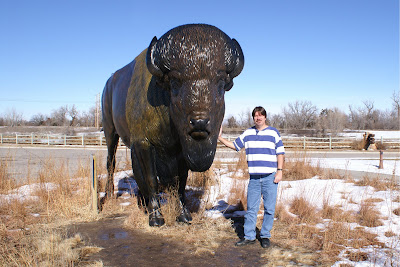 The Buffalo and I.

Once inside the pavillion, the first thing we met was this grizzled prospector type. I asked if he got many requests for people to take his picture. He said yes and posed for yet another one. 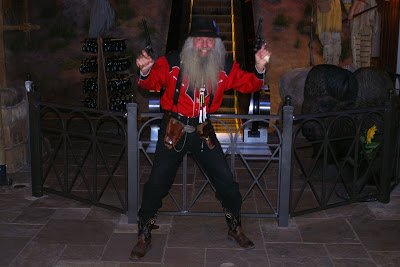 The Grizzled Pioneer with 6-guns blazing.
They really honored the buffalo around these parts, I swear they must have practically worshipped it. We saw images of them just about everywhere - they even grew their shrubbery to resemble this majestic beast! 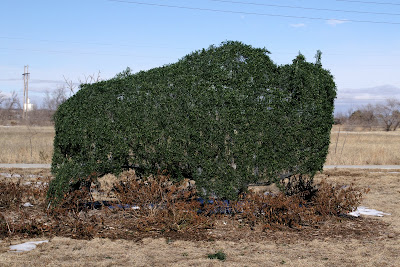 The mighty Buffalo - in shrubbery.

After seeing all we needed to see at the Great Archway Monument, we got back on the road and drove east some more. 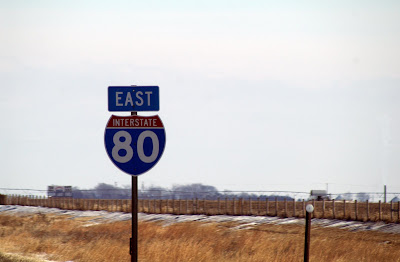 One of the countless million I-80 markers we passed. 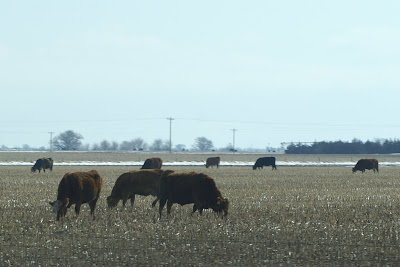 Cows!
As promised, above you'll see some of the cows we saw while travelling through Nebraska. It seems like all they had there was wide, open spaces and cows. Not much else to see. 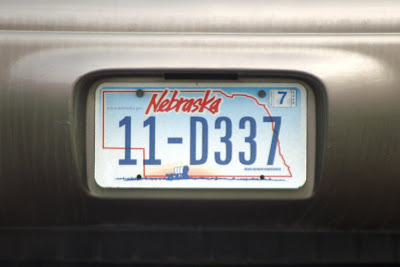 Once we had reached Lincoln, Nebraska, we found out that they had dug out from underneath the snow they had gotten while we had passed through the first time. The streets were fine. I wish I could say the same about the drivers. The above license plate actually belongs to a guy that didn't even have the courtesy to let out-of-staters into another lane. And we saw a huge 3-car accident just after we met this driver. Fortunately, it was on street we weren't using, so traffic wasn't affected by it much. 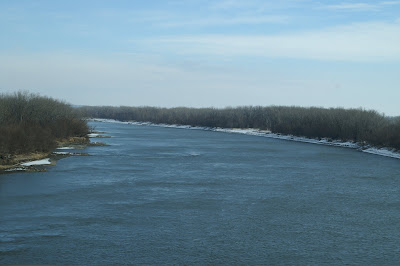 The Missouri River, which separates Nebraska and Iowa.

This time, we were going to pass through Iowa during the daylight hours, so since Phillip was doing the driving for the first half of the day, I prepared to get plenty of pictures of this state. Once we crossed the Missouri River, we were then in Iowa. And would remain so for at least 4 and a half miles again! 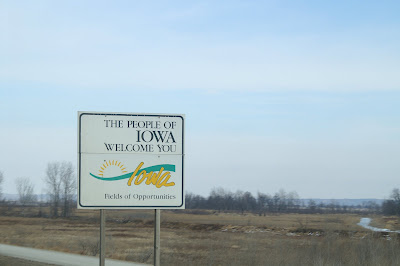 The people of Iowa welcomed us. That was nice of them. 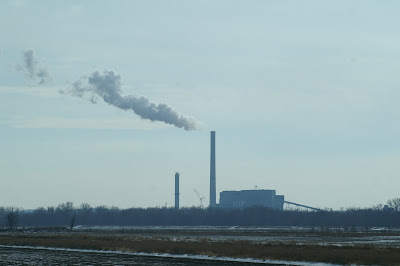 A huge polluting smokestack in the corner of Iowa.
There wasn't actually that much to see in what little of Iowa we passed through. I'm sure it's quite a lovely state, but all we saw was one big building with a huge smokestack sending up a cloud of pollution in the air. Nothing to really write home about. 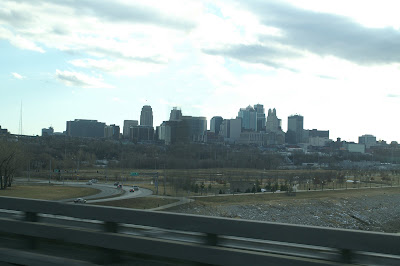 And then we were in Missouri. I have to point out that on the way up, we didn't see much due to the fact that it was night. But, we did notice a whole bunch of new and used car lots. We witnessed many more of the same during the daylight hours, too. We headed southward until we got on I-70 East and veered toward St. Louis and then home. 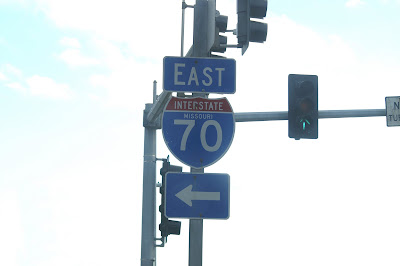 Once we got past Kansas City, Missouri, we witnessed two car accidents. Both times, the ambulances passed us on their way, so they must have just happened in front of us. Before we came to the second one, I saw this bumper sticker on the back of a car in front of us: 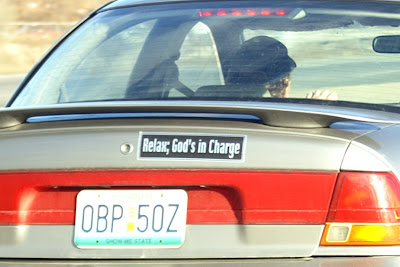 Five minutes later, then we came upon the wreck itself: 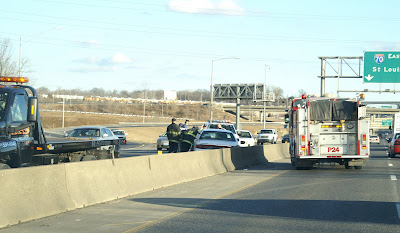 Another accident, at least this one wasn't caused by snow.

I looked out the window and suddenly, there was the Kansas City Chief's stadium. I got a quick picture of it, but it wasn't a very good one because I wasn't prepared for it. You can't see it in this picture, but the Kansas City Royal's baseball stadium is directly behind. 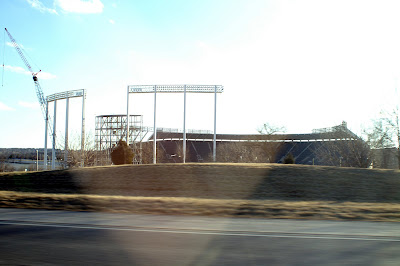 The home of the Kansas City Chiefs NFL team.

We had calculated out our last mileage and it figured out that the halfway point would be somewhere past Kansas City. So, we looked for a good place to stop and eat and take a break, and pulled off the road. We had hoped to find a Long John Silvers because we were in the mood for fish, but there had only been one and it had been in the heart of Kansas City. Instead, we settled for a Hardees. It was right next to a family restaurant and we could have had a good sit-down meal there, but nobody but me seemed to be interested in fresh gizzards. Go figure. 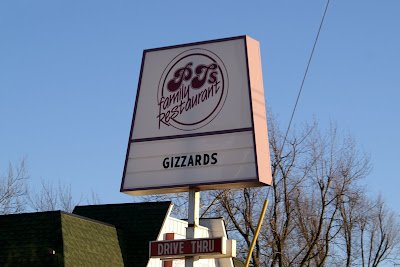 When we got back on the road, I took over for the home stretch. We knew we were going to make it now. And aside from some road construction on I-70 in St. Louis, which didn't apply to the part we were going to be using, we had a straight shot from there to I-64 which led us all the way to our exit for Fairfield, Illinois. We reached there at about 11.30, unloaded a few things of Phillip's and then I put Sarah's things in my car, which I left parked there, got my camera and clothes, and then drove to Norris City, where I live. I was never so glad to see home in my life. But, we had made it all the way to Utah and back, in one of the worst blizzards of recent years, and were in one piece. Sarah and her hamster Nora made it safely, so we had achieved the goal we had set out to do. I can mark off 3 more states now that I've travelled through in this great country of ours, knowing that I'll never go to Utah again in the winter. And the people said 'Amen!'

Posted by HaarFager at 7:24 PM