As I have mentioned before in this blog, I cover all sorts of newsworthy events, photographically speaking of course. Some of the shots I take make it to the front pages, some don't. Here are a few recent ones from both categories. 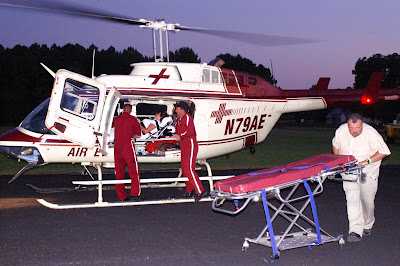 Now, here's one that I really worked hard to get published. But it happened to come on a weekend that was rife with local news items. So many so, that there just wasn't room for this Life Flight Helicopter action shot. Such is the newspaper game - old news is not important any more. Still, I thought it was a good picture and should see the light of day. Therefore, here it is. 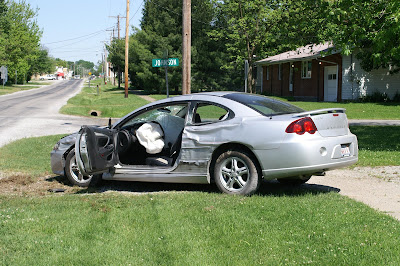 Previously I have shown some automobile accidents that were published in my local papers. Well, here are two more, one that got published and one that didn't. The one above almost resulted in my death. Shocking!? Well, as regular readers of my blog know, I am an avid Butterfly photographer. It doesn't show in this picture, but just on the other side of this car is a culvert that I had been in earlier that day because it seems to attract several different species of Butterflies. The smashed car pictured was involved in an accident four blocks up the road on the left and it had lost it's braking ability. So, as it careened faster and faster out of control, the teenage girl driving it felt that the only way to get it stopped was to pull it into a ditch off the side of the road. Well, she hit the culvert and flipped her car over until it was almost facing the way from which it had come. I was about a hundred feet on the other side of the road by this time, along the edge and happened to look up as it pounded into the culvert and came to rest like it sits. Naturally, I had my camera in my hands. It was a story that literally fell into my hands. 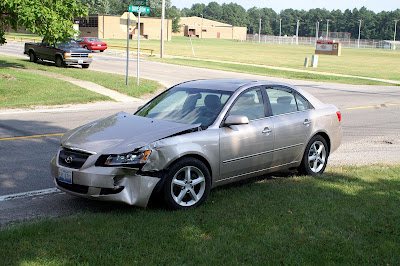 This is another accident that I heard about over my scanner and hopped over to cover it. It didn't result in a sale, because I think it involved the local police. The other vehicle was our town cop car and although it doesn't show, was damaged even more than this car. I have since found out that the editor of my hometown paper quit her job because of differences with City Hall. And City Hall hires the police officers here. I wonder if there is any correlation between these two facts and the fact that this story didn't get picked up? The world may never know. You decide. 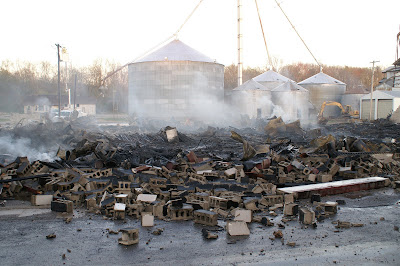 The two pictures, above and below, were part of the massive fire that struck the "biggest little furniture store in Southern Illinois," in tiny Omaha, Illinois. It was so big, it took out the buildings and businesses along a whole city block. The coverage it got spanned several different local papers, and the one that picked up my two pictures also had photographs from a couple other photographers to suppliment the story because it was so big. 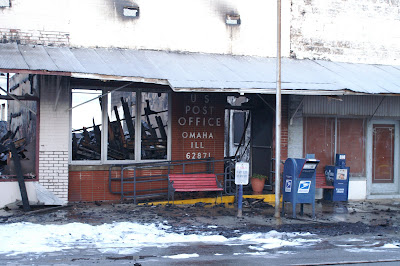 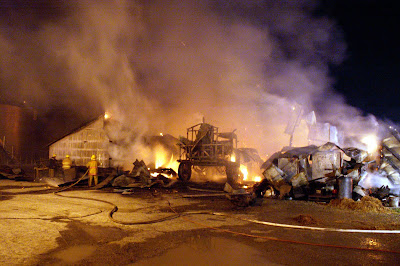 This was another fire I covered, and I found out about it because the fire trucks went screaming right past in front of my house. I naturally followed them and arrived at this scene. Fire departments from four or five neighboring communities were involved, but unbeknownst to me, my local paper had sent a photographer, too, which I didn't notice and therefore they didn't need my shots. They were just too good to waste, though. And their shots didn't turn out near as good as mine - what can I say? 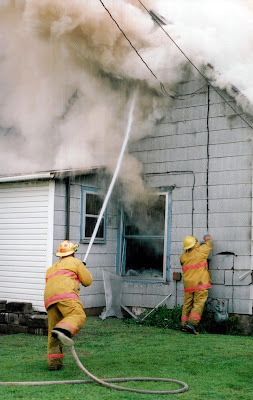 I seem to attract danger. The reason I say this is that the above house fire happened right across the street from my home. Naturally I got full coverage of it. This picture was carried by one nearby newspaper, but not by my local one. They sent somebody else late in the event and I thought their pictures weren't near as good as mine. But, that's the way the cookie crumbles. 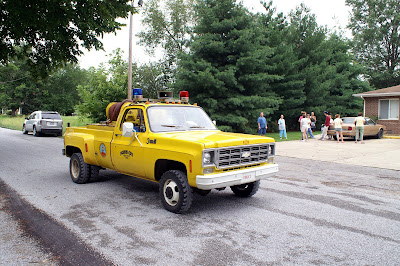 This was another fire that happened just about 3 blocks from my home, and although the photo didn't get picked up, I still wanted to publish it here in my blog so that our local fire fighters can get the recognition they so justly deserve. They are an all-volunteer group and are always there on the spot in record time. They keep our small town very safe! I have shown their smiling mugs on a previous post, so you can see them if you'd like to know what they look like. 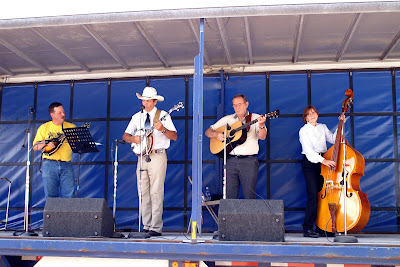 This picture was of one of our local events, the annual Fairfield Bluegrass Festival. I just posted it to show that death and destruction isn't the only thing I cover.

Well, that's it for another exciting post! Be sure to stay tuned for more. I might post something just a little less intense the next time, though.
Posted by HaarFager at 2:21 AM No comments: Links to this post